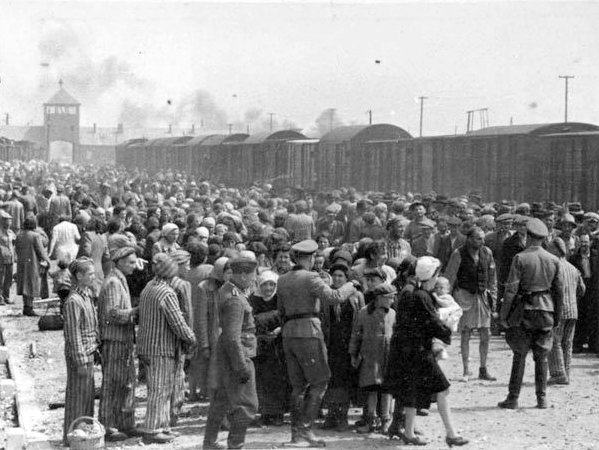 Today (27 January 2014) we remember (I don’t think celebrate is the right word) Holocaust Memorial Day. As most of us above a certain age have, I have watched many programs which have had things relating to the Holocaust in them. For me most poignant was the ending to “Hitler: Rise of Evil” where it went through the list of statistics that were associated not only with The Holocaust but for World War 2.

It has to be asked whether we as mankind have learnt the lessons of such atrocities. We have situations in various countries throughout the globe that are reminiscent of the discrimination that led to The Holocaust. The only reason (in my opinion) that some of them have not spread far is the conflicts are quite localised even though the hatred between groups of people is obvious. Again as with The Holocaust the hatred is often along religious lines.

To me it appears that for every generation that passes so does a chunk of the humanity and freedom that was so hard fought for.

The danger (again in my opinion) is when people begin to start to see unnatural death/murder/homicide as an acceptable “part of life”. In these situations the emotions that are naturally attached to such events are stripped and one no longer sees the enemy as someone’s Mother or Son etc.

As a soldier the causing of someone’s death would always have been a last resort and the knowledge that one has the skill and equipment to not only stop somebody’s heart from beating but the ability to metaphorically break the heart of a full family or more is one that is normally not taken for granted.

Death as a habit

In the early part of this century there was an outcry (an rightly so) after torture was discovered at the Abu Graib detention centre.

Look: I am in no way saying that what went on there was right (it was completely wrong) but I feel that I can offer a bit of an explanation for the behaviour of the persons convicted of the torture.

When one is working around death and human misery on a daily basis and it is the prominent feature of their lives the mind has to find a way of dealing with what it knows to be wrong.

When I was on my bomb-disposal tour I was surrounded by death many times a day and it was the over-riding factor in my life at that time. I/we did things on that tour that our minds would not think of doing under normal circumstances. Death and therefore human life became cheap and worthless and our minds had to find a way to deal with the enormous stresses that they were under. In this situation your mind finds a way to deal with it or you crack up – it’s as simple as that.

These are the dangers of living and working in an such environments. Although these examples are not on the scale of the Holocaust they show that the mind can make us do things we would not ordinarily do.

As time passes and so do the survivors of The Holocaust we have to rely more and more on their stories from other sources (papers/recordings etc). It also makes it easier for those convinced The Holocaust was a lie to spread their thoughts unchallenged by first hand knowledge.

Recently “la quenelle” invented by the French “comedian” Dieudonn M’bala M’bala has been made even more famous by the French footballer Anelka. Anelka now faces a lengthy ban for his reverse Nazi salute and in my opinion this will not be a long enough ban. He is seen as an influential figure amongst the young and there are many reports of children in schools now doing the quenelle. Although this is claimed to be an anti-establishment gesture I believe it to be an anti-Semitic gesture and I believe Anelka should face a one season ban (as should all racist football convictions).

Iby Knill is a woman that has survived the most notorious concentration camp – Auschwitz. She has given a 20 minute interview which is available on You Tube and has also written a book about her experiences. Is it because of people like Mrs. Knill that we are able to keep the memories (and by definition the lessons) of The Holocaust alive.

In the interview she says that most of the Germans were “Twisted”. It may be that their mind was telling them to do things they wouldn’t normally do because their mind was under massive stress; it may just have been because they hated (possibly by brainwashing) the Jews.

Although this post has been a bit all over the place I hope that I get my feelings on The Holocaust across and I hope I can offer some insight into why some people see life as cheap.

Do I dislike the German’s because of The Holocaust? Absolutely not. That would be like hating the current UK Government for the Miner's strike of the 80s.

After living in Germany for 5 years as part of the British Army I can honestly say that the German’s are just as nice as the British. I have had many good nights out in Germany, often leaving me friends and wondering off my myself (a bad habit I know) and most of the time I end up talking to Germans at the bar the same as I do/did in English bars. My wife and I have visited quite a few German attractions and have found the hospitality second to none. It is one of my only regrets that whilst posted in Germany we did not visit Auschwitz.